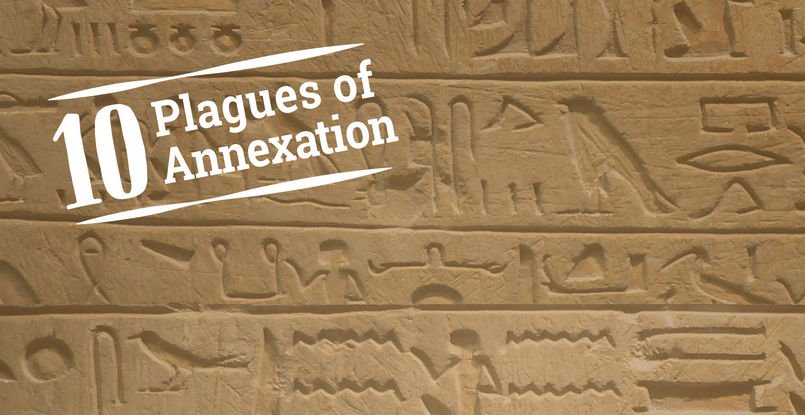 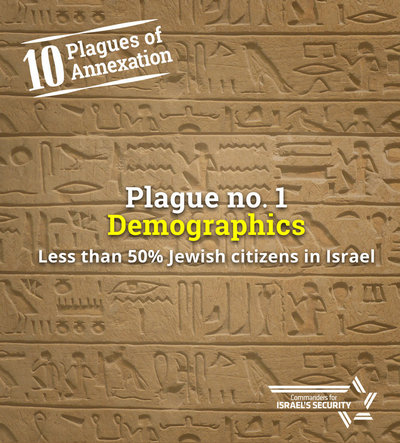 Seventy years ago, the democratic State of Israel was established as the national home of the Jewish people. It was founded on the basis of the principles of the Declaration of Independence and the idea of a solid Jewish majority.

Today, some in the political system are willing to undermine those ideals in pursuit of a dangerous experiment: the annexation of the West Bank; its millions of Arab inhabitants included.

The debate is not about statistics. It is about the future of our nation and what the home of the Jewish people will look like when incorporating additional three or four million Muslims.

This is the first plague of annexation. It will render us, the Jewish citizens of Israel, a minority in our own country.

Talk of ‘only’ partial annexation is deceptive as it will inevitably lead to a complete control of the West Bank. It cannot but undermine our solid Jewish majority.

This is the first, but by no means the last of the plagues. Stay tuned for the other nine. 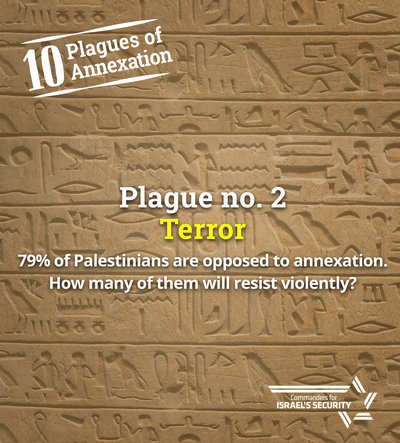 Knesset annexationists owe the people of Israel an accounting:

It is not inconceivable that Palestinians would resort to violence in opposing annexation, only, once annexed, they would be free to travel throughout the ‘unified’ state, sporting Israeli ID cards.

We have witnessed a preview of this on an almost daily basis in Jerusalem over the last two years.

As the annexation plague results in bloodshed and the loss of Israeli lives, the hands of the Shin Bet will be tied once the territory they now operate in under rules of engagement applicable to occupation, becomes part of Israel.

Unfortunately, this is not the last of annexation’s plagues. Stay tuned for more. 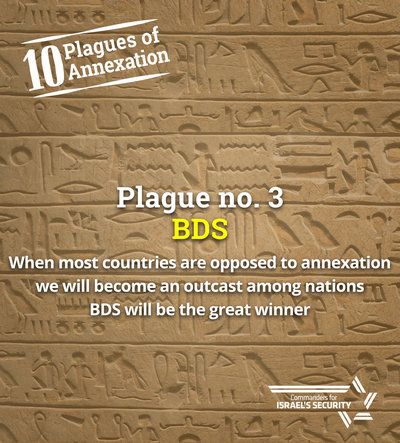 The third plague of annexing the West Bank is undermining Israel’s standing in the world thus enhancing the potency of BDS-like hostile movements.

In an annexation scenario, Israel would have to decide if it is a democracy – with equal rights to the millions of annexed Palestinians, thus forfeit its Jewish nature, or maintain its Jewish nature by depriving the annexed population of civil rights.

As many Israelis value our Jewish character over our democratic values, Israel will turn into an apartheid state. This will find no support in the enlightened world, not even in Trump’s United States, nor among the overwhelming majority of world Jewry. The only beneficiary will be hostile movements such as BDS.

But it is not only young (and older) Jews abroad who will take offence at an Israel that no longer reflect their values. How many young Israelis will refuse to live in a non-democratic Israel?

Alas, this is not the full story. Stay tuned for more annexation plagues. 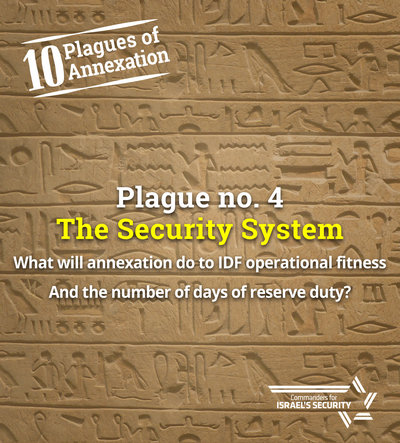 In recent years, the combined effect of our capable and dedicated security services; the security fence; and the cooperation of the Palestinian security services has prevented most acts of terror originating from the West Bank.

Annexation means no separation barrier and the end to security coordination with the PA (assuming the PA even survives such a unilateral Israeli move).

This new reality would force Israel to overhaul all aspects of its security at an unimaginable scope and at immense cost.

The police would have to increase its ORBAT and to be doubled in size. The IDF would have to keep some 120 companies on the ground at all times. Maintaining troops on such scale will have severe repercussions for the IDF’s training and combat readiness in both the regular army and in the reserves with regard to scenarios of armed conflict in other arenas – north (Syria, Lebanon) and south (Gaza).

What does this mean for us? Many more days of reserve duty devoted to routine security; less combat training impacting the preparedness of the reserves, and astronomical budgets coming out of our pockets.

Want to learn about the fifth, sixth, and seventh annexation plagues? Stay tuned over the next few days. 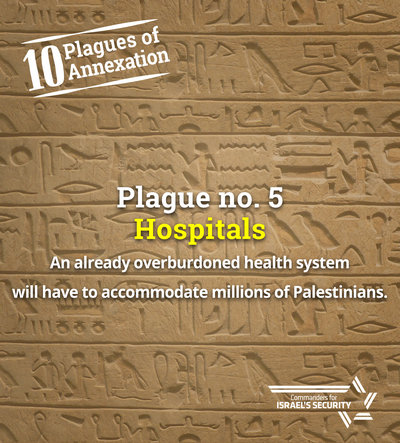 It is hardly a secret that Israel’s public health system is on the verge of collapse. The ERs almost always operate at well over 100 percent capacity; there are not enough beds in the wards; patients sleep in corridors; and doctor’s shifts often last 24 hours or more.

What does this have to do with annexing the West Bank?

Israel will be responsible for medical services for millions of annexed Palestinians. The limited health services will serve double the population. Our health will be affected. Our tax money will pay for it.

All of us will have to wait longer in the ER, wait longer for surgery, and receive fewer and less effective medical services. And, because of the economic gap between Israel and the West Bank, we will have to finance medical care extended to Palestinians through our medical insurance.

The harm to our health is by no means the last plague. Come back to this page over the next few days to learn about the rest of annexation’s plagues.

The sixth plague – allowances, pensions, and other payments 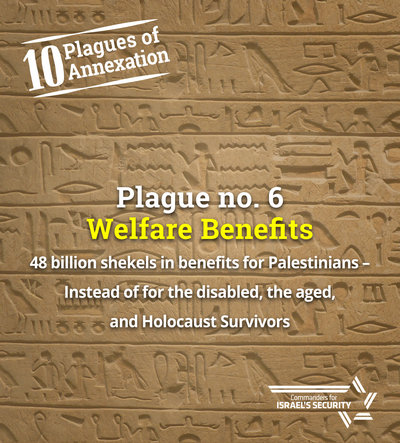 Annexing the West Bank means that Israel would bear economic responsibility for 2.5 million Palestinians, including allowances of immense proportions that would have to come out of the state budget, i.e. our taxes.

Here are some numbers to illustrate:

All of us are familiar with the struggle of the elderly living on NIS 2,500 a month and the struggle of the disabled to raise their allowance to the ‘minimum wage’. Thus far, the Israeli government has found it difficult to meet even those modest objectives.

When it comes to annexation, an estimated NIS 48 billion a year might be paid out to Palestinians instead of to Israel’s disabled, elderly, Holocaust survivors, and children in needy families.

Annexation is an economic plague that will directly affect every Israeli pocket – in services we receive, in allowances to the needy, and in tax rates that will have to be adjusted to finance it all. 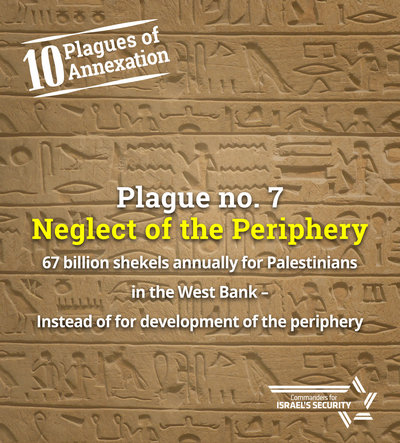 Even today, billions of shekels annually are earmarked for activities beyond the Green Line: defending Jewish settlements, developing infrastructure, and a host of other special needs related to the constant friction with the Palestinian population. These funds come at the expense of the Negev and the Galilee, as well as urban peripheries that are starved for government budgets.

But this will be like a drop in the bucket when compared with the sums that will be required for the West Bank’s 2.5 million Palestinians, once the West Bank is annexed.

The total sum Israel would have to expend on the West Bank is liable to reach NIS 67 billion a year; every year.

Imagine that impact were such a sums were earmarked instead for job creation in the Negev and the Galilee; for cultural activity in the periphery; for transportation infrastructure that would shorten distances between the north, the south and the center of the country.

Should we spend it all on annexation?

When you hear “annexation” remember that the territory they talk about comes with a bonus: 2.5 million Palestinians whom you and I will have to support.

These are the real meanings of annexation. Given the surreal proposal of those supporting this lunatic idea, it is our obligation to call their bluff. 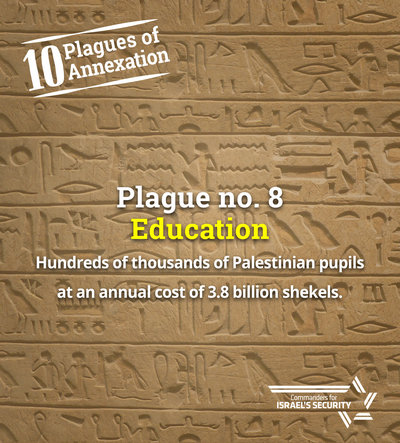 Annexing the West Bank would mean adding over 853,000 children to the school system at an estimated cost of at least NIS 3.8 billion a year.

Let us make this crystal clear: when you take a system that, for years, has faced complex problems and add to it hundreds of thousands of children coming mostly from a disadvantaged socioeconomic background, every Israeli girl and boy will be paying the price.

When you listen to annexation talk, remember that it affects every Israeli child entering first Grade. This is a tough plague for the educational system, one of many that annexing the West Bank would bring upon us. 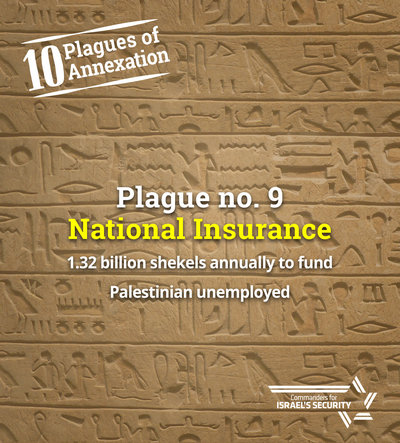 Annexing the West Bank and its 2.5 million inhabitants would mean an unbearable economic burden for the National Insurance Institute of Israel, which as it is, faces prospects of insolvency in a matter of decades. This plague would certainly accelerate this process. It will affect each and every one of us.

Make no mistake about it. That sum would come out of our pockets.

This is yet another plague, one of many, that would affect each and every one of us because of the nightmare notion of annexing the West Bank.

What is the tenth (though not necessarily the last) plague of annexation? Come back to the Commanders for Israel’s Security page in the next few hours to find out.

Tenth plague – the disintegration of democracy 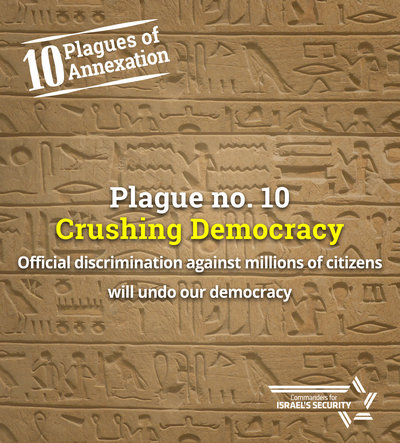 Annexationists look for a “creative” idea to cope with the demographic predicament. Some find it in annexing the West Bank without giving full civil rights to its Palestinian inhabitants.

On its own, annexation is a disaster for Israel, its security, economy, and international standing. However, discriminatory annexation is even worse. It would destroy Israel’s democratic nature. We already witness an erosion in the stature of institutions which are key for a healthy democracy. It is no accident that the assault on these institutions – first and foremost the Supreme Court – originate with annexationists.

Remember the line from the Declaration of Independence “…it will ensure complete equality of social and political rights to all its inhabitants irrespective of religion, race or sex”. The State of Israel was not founded in order to create two classes of citizens – those who can vote and those who cannot.

A forced incorporation of millions of people, making them second-class citizens is a sure recipe for a constant civil war.

And we have yet to mention the severe international ramifications of this horror scenario, whereby Israel becomes a Pariah state.

Soon we will observe Israel’s Memorial Day and remember the tens of thousands of Israelis who gave their lives to secure Israel as a Jewish and democratic state for generations.

We must uphold this vision in the face of the bizarre and dangerous annexation schemes.

We owe it to them, ourselves, and to coming generations.