Speech by Tamir Pardo, former Head of the Mossad, at the 2017 Meir Dagan Conference on Security and Strategy, the Netanya Academic College, March 21, 2017

This past weekend we celebrated my granddaughter’s seventh birthday.  Watching her I thought to myself, “What will Israel look like when she is drafted into the IDF in another ten years?  What kind of country will we leave to our children when they grow to adulthood?”

To be honest, I’m concerned, and becoming more so every day.  After forty years of service in Israel’s security forces, I’m filled with apprehension.  Have our efforts served to promote the Zionist vision of restoring the Jewish People to its historic homeland, or will it all prove to have been a short term, tribal episode?

The establishment of the State of Israel was made possible, among other things, by feelings of guilt on the part of the allies in the wake of the holocaust, together with the global process of decolonization and the emergence of the cold war, whose first signs had already begun to appear.

Ben Gurion took advantage of these unique circumstances, taking a huge risk in the process.  A new and still unorganized state faced off against established countries with regular armies and an Arab population that saw the establishment of a Jewish state as a disaster that must be prevented at all costs.

Without getting into a lengthy chronical of events, let me point out that, once again, we find ourselves in unique constellation of historic forces, circumstances that offer us the chance to firmly anchor the Jewish State as an essential and enduring part of the Middle East.

Peace with Egypt and Jordan was achieved when these countries understood that Israel could not be defeated militarily no matter what combination of forces they brought to bear.

It was this understanding that led Sadat to make his historic choice.

From the very beginning, it was clear that the Palestinian issue is what stands between a temporary, provisional arrangement and peace.  At the end of the day, a peace agreement derives its strength from an understanding between peoples, not an accord between governments.

Popular hostility in Moslem countries resulting from the Israeli-Palestinian conflict has made normalization with Jordan and Egypt impossible, and has rendered anything other than secret agreements with other Arab countries impossible.  The Palestinian issue serves as a categorical limitation on the establishment of formal relations between Arab states and Israel.

By all accounts, Israel is an unprecedented wonder

The IDF is the strongest military force in the region, and one of the most powerful on earth.  Israel has one of the world’s best and most effective security establishments, an economy growing at an unrivalled pace by western standards, an enviable debt-to-GDP ratio and constantly expanding foreign currency reserves.  The Shekel is considered one of the world’s strongest currencies.  Israel is an innovation leader in cyber, information technology, agriculture and the internet of things, robotics, medicine, space, industry and security.  All this has been achieved without natural resources (it will be a long time until natural gas discoveries begin paying off) and in the face of constant security threats and repeated rounds of warfare on an unprecedented scale.  Why, then, should we be concerned?

Israel is sitting on a bomb that has been ticking incessantly over the years. Yet for some reason, we have chosen to bury our heads deep in the sand, feeding ourselves alternative facts and creating all kinds of new, external threats so as to avoid having to face reality.

Two religious groups of roughly equal size – Jews and Moslems — reside between the Jordan River and the Sea.  There are 1.7 million Arabs in Israel, between two and 2.5 million on the West Bank and another two million in Gaza.

Israeli Arabs are full and equal citizens.  But the non-Jewish residents of Judea and Samaria have lived under Israeli military rule since the Six Day War.  We ourselves have determined that territory is subject to military law, and under the rule of the IDF.

As for the Gaza Strip, despite Israel’s complete withdrawal, we still bear responsibility.  Water, electricity, trade – all are subject to Israeli control.  Because of our blockade of Gaza, we are answerable for the humanitarian situation in that territory as well.

Three economies coexist between the Jordan and the Sea, all operating with Israeli currency:  the Israeli economy, with a GDP per person of $36,000; the economy of the West Bank, with a GDP amounting to some $3,000 per head, less than 10% of Israel’s; and that of the Gaza Strip, with a GDP per person of between $1,000 and $1,500, or just 3% of Israel’s.  The level of health, educational and welfare services in Israel is incomparably higher that of the West Bank and Gaza.

Back to my granddaughter’s birthday.  What, exactly, do we want?  What do we aspire to as a nation?  How do we imagine the State of Israel in another decade or two?

As I said, a unique constellation of forces offers us an unprecedented, one-time opportunity.  Upheavals in the Middle East have led moderate Arab countries, from Morocco in the west to the Gulf states in the east to see Israel as a strategic asset, a countervailing force to regional threats, an ally in promoting stability and prosperity.

The war against ISIS has shaped the Middle East agenda to a large extent, with various mutations of Al Qaeda fighting a war against the infidels – Sunnis above all.  Most theatres of war in the Middle East are today in Sunni areas.  The struggle against the remaining infidels – Christians, Shiites and others – is not currently their main objective.  The first coalition against ISIS led by the US included both Sunni states and western countries.  Negotiations on the Iranian nuclear deal were carried out at the same time.  The conclusion of those negotiations and the signing of an agreement made Iran a central player in the Middle East for the first time in modern history.

How we reached this point is another issue entirely. The fact is, however, that Iran is now a dominant power in the struggle against ISIS.  Bashar’s coalition, which includes Russia, Iran and Hezbollah, has turned Iran into one of the “good guys.”  What’s more, Iranian forces and Iranian-backed Shiite militias are fighting side by side with American-supported forces in the fight against ISIS in Iraq.  Iranian involvement in the war on ISIS is evident on virtually all fronts.

In cooperation with the Iraqi and Syrian governments, Iran is busy resettling Shiites in cities villages throughout the region, creating a belt of Shiite control from Teheran to Beirut.  Iranian influence is a palpable threat to the moderate, Sunni states.

On the one hand, these developments present a potentially unprecedented threat to Israel. On the other hand, a rare confluence of interests between Israel and the moderate Arab states has emerged.  Will we be wise enough to be incorporated into this regional effort for the first time?  It is worthwhile to remember that no opportunity lasts forever, and missed opportunity may not recur.

With the situation in constant flux, today’s balance of power affords Israel a rare chance to build relations with a number of Moslem countries.  Unfortunately, much of what has been published in recent years is misleading.

Secret relations that take place “under the radar” are by their nature transitory.  The key to regional integration is to build economic and social bridges between countries, facilitating trade and tourism.  None of this will happen without a resolution of the Palestinian problem.  The deeper, the more open and above board relations are, the better suited they will be to survive the inevitable shocks and disruptions that take place from time to time.  Israel’s regional integration is a key to its very survival.

Solutions that were creative 20 or 30 years ago are no longer relevant.  Yesterday is history.

To quote a friend of mine who lives in the Middle East, “The Jews and Arabs have the same dream, only in reverse. The Jews dream they will wake up one morning and not find a single Arab between the Jordan and the sea.  The Arabs have the same dream, only in theirs, it’s the Jews who disappear.  We Arabs have awoken from our dream.  We know you are here.  You have tremendous advantages. Let’s join hands and make the entire a region a better place.  The Jews – you haven’t woken up yet.”

Israel must choose what it wants, and what is in its best interests.  Not just for today, but for the years ahead.  The time has come to take our heads out of the sand, look squarely at the demographic reality and face up to the question of what kind of country we want to live in.  Life in the shadow of alternative facts holds out only disaster for the future of the Zionist enterprise.

The writing is on the wall.  All we have to do is lift our eyes and read it.

The risk Ben Gurion faced when he declared the establishment of the State was ten times greater than the risks entailed in the decisions we face today.  Israel requires brave leadership to navigate a complex reality and guide the country down a new path.

Let me conclude with a quote from Alice in Wonderland that describes perfectly how Israel is being led today:

“Would you tell me, please, which way I ought to go from here?”
“That depends a good deal on where you want to get to.”
“I don’t much care where –”
“Then it doesn’t matter which way you go.”

“–so long as I get SOMEWHERE,” Alice added as an explanation.
“Oh, you’re sure to do that,” said the Cat, “if you only walk long enough.”

The State of Israel has chosen not to decide, to shut its eyes and keep walking in the hope that the conflict just resolves itself.  Maybe the Arabs will disappear one day.  Maybe there will be some kind of miracle.  May the US or the international community impose a solution, making it easier for us to justify whatever measures need to be taken.  Or perhaps we’ll just end up in a binational state one day, unable to untie the Gordian knot that binds the two populations.  Who knows?  That’s what happens when you don’t decide.

Time does not stop.  Reality is constantly changing, and with it the conditions and alternatives for a solution to the conflict.

Palestinian autonomy, as envisioned in the peace treaty with Egypt, was never implemented and ceased to be relevant.  The Jordanian option evaporated as well.  As time goes on our options continue to shrink as we approach the point of no return in which the only remaining alternative is a binational state where all citizens share equal rights.

We are fast approaching “injury time” as the Middle East peace match comes to a close.   The clock is ticking away.  The time has come to take a hard look at the facts — not the alternative facts – and decide.

The time has come to make a choice. 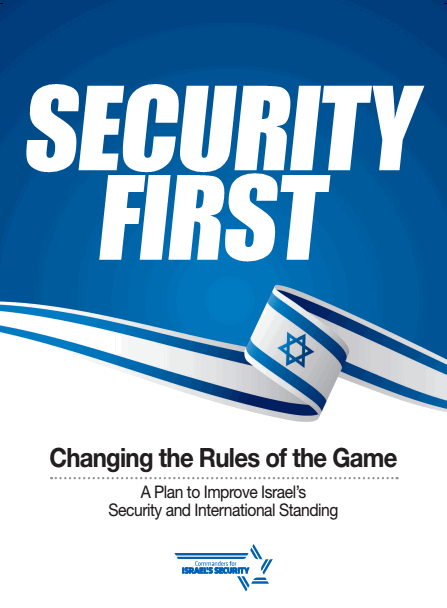 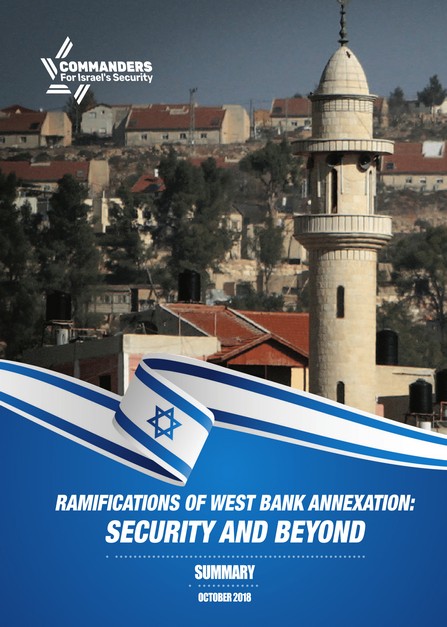