On Thursday, October 22nd, 2015, the CIS held a conference at Air Force House in Herzliya, attended by 200 members and supporters. ‎

“The future of the State of Israel does not depend on the availability of a partner. ‎ Israel must take a security-diplomatic initiative”

The People of Israel are experiencing a period of anxiety concerning personal security, and for good reasons. ‎This is not the first wave of terrorism, and without a fundamental change in conditions, it can be safely predicted that the current round will not be the last.  ‎

This wave of terrorism is a concrete and painful manifestation of the risks facing Israel as a democratic-Jewish state from the emergence of a bi-national reality. ‎It is the outcome of failures of many Israeli governments and the absence of a strategy and of a courageous security-diplomatic initiative.‎

Our security forces are working diligently and courageously in protecting our people and lowering the flames. ‎ But these activities, even if proven effective in the immediate future, do not address the core problem, and thus cannot prevent the next round. ‎

The policy of maintaining the status quo has failed repeatedly, resulting in outbreaks of violence from the north, south, and from within. ‎We cannot control the behavior of our neighbors. ‎ But with different conduct we can change their calculations; strengthen the moderates; weaken the extremists, and ensure that – when the time comes – our people will be united in the conviction that we are just, and the relevant international community will not unite against us.‎

It is not just that sanctifying the status quo does not fit in with an ever changing environment, but even as Israel declares allegiance to the status quo, it constantly changes it: legalizing isolated illegal settlements; increasing the number of settlers beyond the separation fence; building settlements and neighborhoods to prevent Palestinian territorial contiguity; as well as a huge investment in infrastructure, in building roads to nowhere – none of these are expressions of a status quo. ‎

These are material changes that jeopardize the prospects of separating from the Palestinians; feed frustration, hopelessness, and fury among Palestinians; radicalize the street against us in neighboring countries; and irritate our friends in the West. ‎

“Israel does not initiate; it lets itself be dragged along” ‎

For a long time, Israel has taken no initiative. ‎ We have let ourselves be dragged along by events.  That is how we were dragged into the Second Lebanon War; into Operation Cast Lead; into Operation Protective Edge; and now into the uprising of knives and car ramming attacks.‎

‎The future of the State of Israel must not be dependent on the availability of a partner. Only on our own decisions” ‎

The two-state solution, which is the best solution for the State of Israel, its security, and existence as a democratic-Jewish state, seems farther away than ever. ‎ But current Israeli policy jeopardizes its possible realization in the future.‎

The standing of Palestinian Authority Chairman Mahmoud Abbas is dismal, and a large part of the Palestinian public no longer regards him as their legitimate representative. ‎ The Abbas era may soon be over. We may have to wait for his successor.‎ But this is no justification for jeopardizing our long-term security by taking irresponsible actions in the interim. ‎

The split between Fatah and Hamas, between the West Bank and Gaza Strip rules out a dialogue with a single Palestinian government which represents all Palestinians. We can’t change this. But we must avoid any act that perpetuates it, and must encourage measures to change it – including by Egypt and other pragmatic Arab states.‎

The claim that there is no partner – justified or not — must not justify a policy that keeps us stuck in the Palestinian mire. ‎‎The future of the State of Israel is not dependent on the availability of a partner, ‎but is based solely on our decisions.

“We must set Israel’s border with Palestine” ‎

Therefore, we must immediately set Israel’s eastern border with Palestine, including the settlement blocs and the Jewish neighborhoods in east Jerusalem. ‎Such a decisive unilateral decision will be a turning point with far-reaching consequences in future negotiations with the Palestinians and the international community:‎

First and foremost, it will be the ultimate response to trickling terrorism from the West Bank into Israel and will limit the friction points between the peoples. ‎That was the logic behind the construction of the separation fence following the Second Intifada. That logic still holds and is even more valid now; ‎

Such a decision will allow Israel to continue developing the large blocs within the territorial swap concept which has already been endorsed by all relevant parties, including the Palestinians; ‎

Such a declaration, however painful, will clarify the status of the settlements on the eastern side of the border. ‎

“This will rehabilitate our relations with the US and Europe”‎

This decision will make it clear to all that our intentions are serious; it will rehabilitate our relations with the US and Europe; and allow regional cooperation to begin. ‎

In view of the principle that we must avoid any measure that makes it more difficult to achieve a permanent settlement, it is essential to ensure that our actions today do not perpetuate the separation of the two parts of the future Palestinian state. ‎ This means that rehabilitation efforts in the Gaza Strip and efforts at cease-fire stabilization do not weaken the Palestinian Authority, but rather pave the way for its return to the Gaza Strip, if at all possible. ‎

We must strive for a reality in which Israel’s readiness to move forward will yield a response from the relevant Arab states and the international community whereby they undertake to share in the responsibility for the relationship between Hamas and Fatah.‎

Israeli military control will continue until a permanent settlement agreement is reached and implemented, including security arrangements that will allow a different deployment of the IDF. ‎ All to be implemented in accordance with agreed phases and subject to the Palestinians’ meeting the conditions for transition from one phase to the next. ‎

Achieving national goals depends solely on Israel’s decision. Progress toward realizing them does not depend on an agreement with the Palestinians or on the existence of a partner. ‎The stages mentioned and the interim solutions suggested will serve Israel’s strategic objectives in both the immediate and long term. ‎

To talk about diplomatic arrangements – even gradual ones – in these times sounds hallucinatory. ‎ But every crisis has a “morning after”,‎ and it is our duty to try and ensure that the morning after will not be the eve of the next crisis.‎

In this hall, and throughout the country, there are hundreds of senior defense officials who share this vision. ‎ Cumulatively, we represent thousands of years of experience in security in all the defense branches. ‎

We served in all of Israel’s wars without hesitation. ‎ We have lost countless dear friends. ‎ Many of us deal with the scars of battle every day and every night. ‎

This is the time to step forward to serve as a powerful lever for change. ‎Not partisan change – that is not our business as a movement. ‎ But to change the national direction. A change that will ensure that our children and grandchildren will not be forced to experience what we have experienced. ‎ A change in which they will grow up and raise their children in a secure and strong Jewish-democratic state. 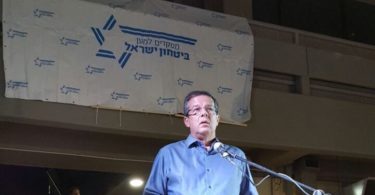 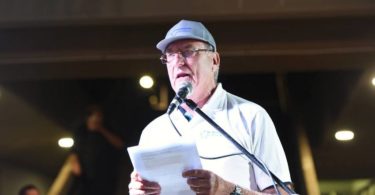