Throughout its history, Israel has been a daring and innovative country, shapingits own destiny. We never let anything stop us – neither enemies nor limitations. Even in the most difficult times, against the most challenging threats, we knew that we did not have the option of despair. We knew to dream of a better future, and we were determined enough to turn the dream into a reality.

Speech by Major General (res.) and former head of the Mossad, Meir Dagan, and the Israel Wants Change demonstration on 7 March 2015

Dear Israeli citizens, participants in this honorable rally, good evening to you all.

I admit that this kind of stage is not my natural place. Those who know me are aware that I was never a man of grand speeches. I am not a politician, nor a public figure. Here, too, this evening, I have come without personal aspirations, without seeking a position, and without a grudge or bitterness.

The only party of which I am a member, day in and day out, is the State of Israel.

Standing before you this evening, I am speaking as a soldier who seeks to do everything necessary and possible for the country to whose security I have devoted 45 years of my life. I have no other aspirations.

Throughout its history, Israel has been a daring and innovative country, which shapes its own destiny. We never let anything stop us – neither enemies nor limitations. Even in the most difficult times, against the most challenging threats, we knew that we did not have the option of despair. We knew to dream of a better future, and we were determined enough to turn the dream into a reality.

I believe that the establishment of the State of Israel is nothing short of a dream come true. I believe that its existence is a historical imperative. 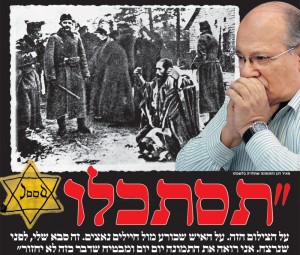 Throughout the history of the Jewish people, there have been many parties which sought to steal this dream from us. Throughout my years of service, I carried with me from place to place a picture of my maternal grandfather kneeling before Nazi soldiers minutes before they murdered him in cold blood just because he was a Jew.

In all my posts, I swore that this scene would never be repeated. I believe that I have done everything in my power to keep this promise.

Today, I also remember the Yom Kippur War, during which there were moments when I thought that we were headed for a fateful defeat. We knew that if the enemy broke through our lines, there would be no one behind us, and that this might be the end of the Zionist dream. When we won the war, I thought that if they could not destroy us then, they probably never will. I still believe that today.

Israel is a country surrounded by enemies, but the enemies do not scare me. I am scared by our leadership.

I fear the lack of vision, the lack of direction, the loss of determination, and a dearth of personal example. I fear hesitation and deadlock, and, above all, I fear the crisis in leadership.

The crisis in leadership is the worst we have ever had.

For six consecutive years Benjamin Netanyahu has served as prime minister. Six years in which Israel has been stuck more than ever before. Six years in which he did not lead one real move to change the face of the region or to create the foundation for a better future.

On his watch, our relations with the United States deteriorated to a an all time lo. The health system is collapsing. The housing crisis has reached a peak. Social gaps continue to widen. The distance between the periphery and the center has never been greater. One in every three children in Israel lives in poverty.  40% of Israel’s residents cannot make ends meet.

On his watch, our relations with the United States deteriorated to a nadir. The health system is collapsing. The housing crisis has reached a peak. Social gaps continue to widen. The distance between the periphery and the center has never been greater. One in every three children in Israel lives in poverty.  40% of Israel’s residents cannot make ends meet.

The Israeli citizens sees this destruction. Theysee leadership that does not take notice of themdoes not care. They cannot but ask:

Where are you headed, Mr. Prime Minister?

Why should you be responsible for our fate if you are so scared of assuming responsibility? Why does a man seek leadership if he does not want to lead? How has it happened that this country, many times stronger than all the countries in the region, cannot carry out a real strategic move that will improve its condition?

The answer to that is clear:

We have a leader who is fighting only one campaign: the campaign for his personal political survival. For this war, he is dragging us into a bi-national state and the end of the Zionist dream.

Has not the time come for sobering up? Will Israel’s people finally understand that we cannot remain hostages?

Today too, I do not denigrate the threats.

We must not be confused; in our environment there are many actors which would be happy to see us pack up our bags and leave. Iran’s nuclear program is indeed a real danger. No one in Israel and in the United States argues with that. It is necessary to deal with this problem wisely, harnessing our allies for the task insteadof fighting them.

Terrorist organizations continue to pose many challenges for us. We also know that if there is a settlement with our neighbors, there will  be radical groups that will use violence to harm the State of Israel and its people. We must still have a sword, but it may not be destiny that we will live by the sword.

To emerge from this situation, all that is needed is a  courageous leadership that will know how to make decisions.

We had such leaders in the past, from both the right and the left – leaders who knew to put the good of the country as a paramount value before every other consideration.

I wish to say to you that, as a man who has personally worked for three prime ministers and has seen different kinds of leadership, as a man who personally knows many of the current candidates:

There is definitely a better alternative!

In the political system there are people whose hearts are in the right place, who believe in the need to restore sanity, to stop being afraid and to cause fear, to take responsibility for our fate.

Do not fall into populism. Be doubtful. Do not believe the slogans. Do not blindly follow empty charisma. We have already seen where this charisma has lead us. Speeches are not important , deeds are. In our short history, there were leaders who spoke little and did much, who stuttered in speech but not in deeds.  Today, they would be called “greyish”, or “lacking in charisma”, but they did marvelous things. They knew how to set a path and a vision. They knew how to strive for it with determination and how to reach new heights.

Albert Einstein said that insanity is doing the same thing over and overagain and expecting a different result. Israel’s people are sane enough to understand that it is impossible to expect different results from a leader who has amassed six consecutive years of failures.

It is no coincidence that an absolute majority of former defense chiefs, chiefs of staff, heads of the Israel Security Agency and of the Mossad think that we must exhaust all the options to reach a peace settlement.

We have all lost friends, we have personally experienced the price of war. I still feel this price, day after day. We, who won in war, know that our struggle will only be crowned with success when war is behind us.

Here is my great dream:

to bequeath my three children and seven grandchildren a different society. I dream that they will be able to devote their lives to growth, development, and realizing their dreams, rather than to fightings wars for their home. I would like to guarantee them a better life than my own.  I would like to bequeath them a society that will drive out discrimination and violence, that will return to its roots and assume responsibility for its fate, a society that will guarantee a real opportunity for all its people and will strive for real equality.

As Levi Eshkol said: “I have no ambition to a light unto the nations. It is enough for me if we succeed in being a light for the Jews. I will be content if we, as a country, will be a light to ourselves.”

To be a light unto ourselves, we must remember that we deserve something better.

The change begins with you. You are the generation that is planning our future far better than the previous generations. You are better soldiers than we were. The young people I meet today are more thoughtful and they see far.  Now is the time to use calculation and strategic outlook to embark on a different path. Fight anyone who says that he lacks the energy to vote, that he has more important things to do. There is nothing more important.

There is no choice now.

from the historic intersection where we are now, there is no road back.

Let your conscience guide you.